When a man reached an advanced age and/or was in feeble heath, he might petition the county court to be relieved from the payment of poll taxes. Often the petition was granted, but not always. It appears petitions were granted or rejected on an individual basis rather than specific guidelines or rules.  The petition of James P. Joyce in 1875 was rejected. Below is his original petition, which was found in the loose county bundles in the Crittenden County Clerk's Office. This document should have been recorded in County Court Order Book 1874 - 1878, but it was not. 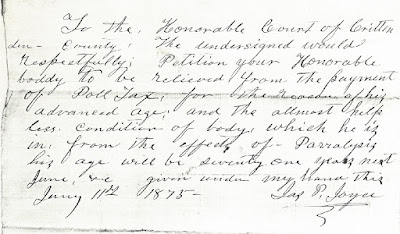 "To the Honorable Court of Crittenden County:  The  undersigned would respectfully Petition your Honorable boddy to be relieved from the payment of Poll Tax, for the reason of his advanced age; and the allmost help less condition of body, which he is in, from the effect of Parralysis  his age will be severnty one years next June &c  given under my hand this Jany 11th 1875 -   Jas. P. Joyce " 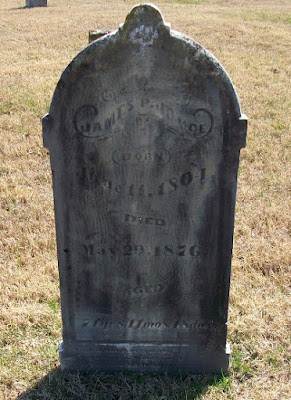