At a time when there were few small-town newspapers in Kentucky, local news  was often reported in newspapers in nearby larger cities. For example, you will find news of Livingston County towns reported in the newspapers of Paducah and Louisville so it is wise to check beyond the county lines to find these jewels of information.

On Wednesday, the 14th of August 1867, the death of a Smithland resident was reported in the Louisville, Courier-Journal.  "We are pained to learn of the death of Dr. David Saunders, of Smithland, Ky., one of the oldest and most respectable citizens of Livingston county. He died on Sunday night, the 4th inst.

Kentucky Items
Smithland Improvement - In spite of the depressing influence of the sand bar which so seriously impairs the navigation of the Ohio at Smithland, the people of that city are "game to the last," and continue to build and improve their pleasant little city.

Mr. A.A. Gratiot [Grayot], the postmaster of Smithland, is building a two story residence, which will be quite an ornament to the place. [1]

Thomas David [Davis], Esq. is making rapid progress with the erection of his new business house on Main street. It will be finished in a few weeks, and will reflect credit upon his taste and public spirit.

Mr. Blount Hodge has been making extensive repairs upon the old Smithland Hotel, and when finished it will be one of the best, most convenient, and most comfortable hotels in lower Kentucky. [Paducah Herald]

An old gentleman by the name of Jesse Thompson, a dealer in fruits, etc, living near Smithland, in Livingston county, had his leg broken on Wednesday last. His horse ran away with his wagon, and he was thrown out, breaking his leg between the ankle and knee. He is quite aged, and his hurt will probably endanger his life.

A little son of Mr. Shull, the Smithland ferryman, had four fingers of his hand cut off by a circular saw on Tuesday last. 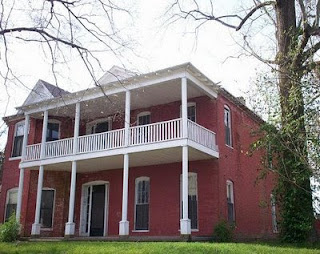 
[1] The Grayot home stood next to the old courthouse. Later known as the Dunn home, the house was demolished 1 July 2009  and the new County Office Building was built at that location.