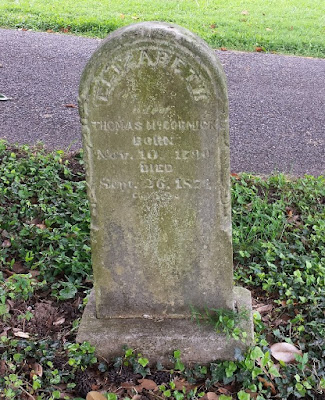 Elizabeth Kellam married Mason Lillard on the first day of September 1808. Consent for the marriage license to be issued was given by Elizabeth's guardian, Isaac Bullard. [1] Elizabeth and Mason had at least two children, Jane W. Lillard and J.M. Lillard. Jane was born 6 April 1815, died 17 November 1886 and is buried, also, in Smithland Cemetery.[2] Jane married David B. Sanders  the 31st of April 1831 with her stepfather, Thomas McCormick, giving consent.[3]  I have no information on J.M. Lillard except he was listed as an heir of Elizabeth McCormick in the settlement report in 1875.[4]

Elizabeth Kellam Lillard married, as her second husband, Thomas McCormick, on 7 November 1819.[5]  McCormick left his home in Ireland in 1816 and landed in Smithland in December of that same year. He became a naturalized citizen of the United States in 1823 at the age of 25 years.[6] It didn't take long for McCormick to become involved in the happenings of Smithland. He had a tavern in his home  and also was a police judge.