My Visit to Patrick County, Virginia

I had an adventure last week that took me back to the areas of Virginia and North Carolina where my ancestors lived in the late 1700s and early 1800s. The trip began with a 9 hour drive through Indiana, Kentucky, West Virginia and across the Blue Ridge Mountains to Patrick County, Virginia, where  my great-great-great grandfather, William Joyce, married in 1804, and his son, also named William Joyce, married in 1828. I had visited Patrick County almost 40 years ago but my memories  of the area had grown dim.

While Patrick County may be dear to me because my ancestors married there, the county is better known as the birthplace of General  J.E.B. Stuart (CSA), who fought and died during the Civil War. It seemed fitting that we entered the county via  the J.E.B. Stuart Highway. 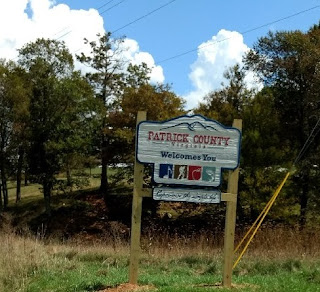 I must confess that  I have a personal reason for being interested in J.E.B. Stuart. His great grandmother, Elizabeth Perkins Letcher Hairston, was a sister to my great-great-great grandmother, Bethenia  Perkins  Bostick (1739 VA - ca 1811 Stokes County, NC). That makes us cousins, doesn't it?

The Patrick County courthouse in Stuart was built in 1852 and is still in use today. 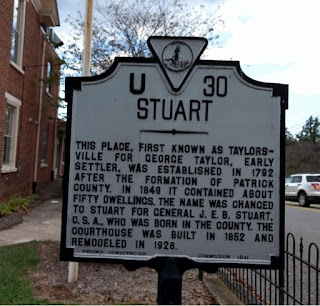 Stuart, Virginia
On the courthouse lawn is a statue dedicated to honoring all Confederate soldiers who served during the Civil War. On the bottom of the statue J.E.B. Stuart is honored as a hero. 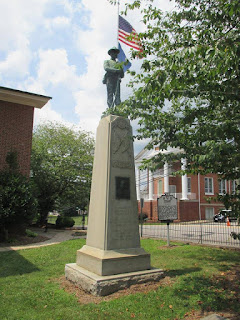 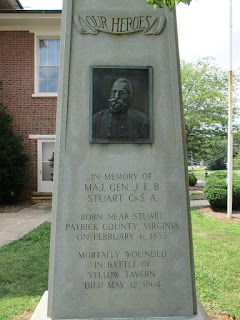 After visiting the courthouse, we headed toward the town of Ararat, Virginia, which is located about 25 miles from Stuart and just a few miles from Mt. Airy, North Carolina. This property is where J.E.B. Stuart's great grandparents settled after their marriage in what was then Pittsylvania County, Virginia in 1778. 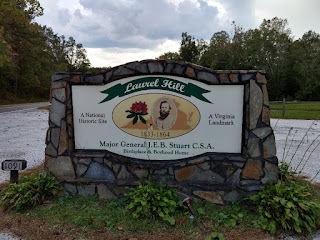 This is a beautiful location for a home. The Stuart property was called Laurel Hill and includes a cemetery, where J.E.B.'s father, Archibald Stuart, was buried  in 1855. In 1951 his remains were moved and reburied beside his wife, Elizabeth, in Saltville, Virginia. 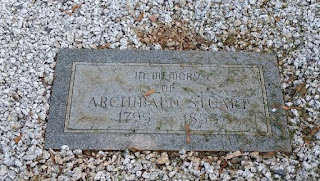 Overlooking the Ararat River is the grave of William Letcher, J.E.B.'s great-grandfather. Letcher was murdered by a Tory during the Revolutionary War. His tombstone, the oldest in Patrick County, states "In memory of William Letcher who was assassinated in his own house  in the bosom of his family by a Tory of the Revolution, on the 2 day of August, 1780, aged about 30 years. May the tear of sympathy fall upon the couch of the brave."  His death left a wife of two years, Elizabeth Perkins Letcher, and a baby daughter, Bethenia, who much later married David Pannill. Elizabeth, the daughter of Bethenia and David Pannill, married Archibald Stuart and they had James Ewell Brown Stuart, also known as J.E.B., on 6 February 1833.

We spent a day and a half in Patrick County and wish it could have been longer, but we needed to go on to Rockingham County, North Carolina, where dozens of Joyce descendants were gathering for the first annual family reunion on September 23.  I'll tell you more about that in a later blog post.  In the meantime, if ever you have the chance to visit Patrick County, Virginia, do so and be sure to visit Laurel Hill.