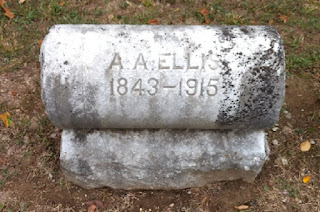 Agnes A. Clement  Ellis died 22 January 1915 and was buried in Smithland Cemetery the following day. Her parents were William B. Clement, born Virginia, and Margarett M. Nunn, born Kentucky.[1]

Agnes A. Clement married James Ellis 23 August 1865 Crittenden County, Kentucky.[2] He had previously been married to Sarah L.A. Jennings and Sarah J. Clement. James and Agnes A. Ellis appear on the 1870 and 1880 Livingston County census records in Smithland. James Ellis died in 1884 in Louisville, Kentucky[3]

Agnes Clement Ellis' obituary appeared in the Livingston County Enterprise and was reprinted in the 4 February 1915 issue of the Crittenden Record-Press in Marion, Kentucky.  It stated that Mrs. Agnes Ellis died at the residence of Wharf Master, T.L. Thompson.  "She was visiting Mrs. Thompson, whose former husband was her brother, when she was stricken with pneumonia and after an illness of about 12 days she succumbed" to the disease."[4]

Mrs. Ellis "came from old and honored families, her mother being a Nunn, and an aunt of Judge T.J. Nunn, recently a member of the Court of Appeals."[5]