Clara Barton and the Ohio River Flood of 1884

The winter of 1883-1884 was particularly severe throughout the Ohio Valley with large quantities of snow and ice  and very low temperatures. When the thaw began the first of February 1884, the water started its trek down the Ohio River.

It was soon evident that a large flood was coming. Evansville, Indiana was designated the center of relief efforts due to its location on high ground.  U.S. Relief Boat Carrie Caldwell  made two trips in February and March 1884 to deliver aid to those in need.

On the first visit, the middle of February, stops were made at the following Kentucky towns:  Uniontown, Caseyville, Carrsville, Weston, Ford's Ferry, Birdsville and Smithland, as well as a number of towns on the Illinois side of the river. [1]

Uniontown:  The town is in terrible condition, every house, about 700, is in water from the second story to the roof.  All business, except for the necessaries of life, has stopped and what little there is, is done from the second floor through the windows into boats.  Water is at the top of the lamp post in front of the Methodist church. John Castella's house with chimney floated down the river.

Caseyville:   The place is all under water with the exception of a few houses. Water is 12 feet deep in the streets.  There were about 100 needy people.

Weston:  Town is in 10 feet of water and all 25 houses are submerged.

Ford's Ferry:  Town has about six good houses, all under water. The wharf boat was tied to a tree.

Carrsville:  Population 250 with 75 houses. Only five families had to leave their houses. 100 people suffering in immediate vicinity and 1000 rations left with R.A. Crotser.

Smithland: This town of 600 is entirely under water. After wind during previous night (Feb. 19), not a sound house on Front Street. W. Ellis' large storehouse, back of Planter's Hotel, is a complete wreck, while the river is full of floating household goods and furniture. 30 houses swept away last night and three-fourths of the people are destitute. The town is flooded back to the hills, being 15-20 feet deep in the streets.  The only brick house standing is the Court House.  Sickness abundant and medical services in constant demand.

Conditions were  noted in all towns along the river on a return trip to Evansville. Conditions were worse on the return trip.  In Uniontown, 61 houses were destroyed by the storm. The following suffered losses: John Roesch's distillery, Williams' tobacco factory  and Gus Franklin lost $5000 worth of dry goods.

A second trip down the Ohio River was made one month later.  The town of Caseyville, Kentucky was in deplorable condition with all streets  impassable and  52 demolished houses. Mr. W.A. Delaney was seen riding on horseback carrying a coffin to bury his child who had died of pneumonia the previous day.

The town of Weston, in Crittenden County, was comprised of 300 people. Thomas Lamb,  town trustee chairman, stated that at Lamb's coal mines and at Bell's coal mines, there are about 51 people needing aid.  Rations were left at most of the towns along the river.

As flooding  improved, the emphasis changed from necessities for life to assisting those left homeless or their homes were in ruins.  It was then the involvement shifted to the Red Cross Association, which was organized for the relief of those suffering by war, pestilence, famine, flood, fire and other calamities. Heading this organization was Miss Clara Barton, who established her headquarters in Evansville.

A steamboat owned by Capt. John H. Troop and named for his father,  Joshua V. Throop, a native of Eddyville, Kentucky and  former resident of Smithland, Kentucky, was put at the disposal of Miss Barton to carry emergency supplies to those left homeless by the flood or whose homes were badly damaged. [2] The J.V. Throop was the first inland vessel in America to fly the American Red Cross flag and, according to regulation, it flew just below the American flag.

A Red Cross Relief Committee was formed with the objective of visiting every town along the Ohio River between Evansville and Cairo and to find the most needy and deserving families. Miss Barton's plan was to load a boat with bedding and clothing for distribution and to supply money to indigent families. [3] Coal was also added to the list of needed items.  Miss Barton and her workers left Evansville on March 8th and headed toward Cairo.

Among the towns in dire need of aid was Smithland, one of the oldest  on the Lower Ohio. "While the water was at its highest stage, a terrific cyclone or tornado struck the town, driving waves up against the second stories of buildings, crushing brick buildings. The scene in Smithland was one of  utter desolation - fragments of wooden buildings everywhere."[4] 500 bushels of coal, along with clothing, bedding and cash were left in Smithland. [5]

The last voyage of relief of the J.V. Throop left on May 25 with a load of clothes, plows and tools, groceries, furniture, and  household items for those who had lost so much during the flood and tornado. The people who had accompanied the Red Cross expedition on the Throop in March sent to Capt Throop a flag, along with a letter, to express their appreciation.[6]

It is certain that the Red Cross, under the leadership of Clara Barton, and the steamer J.V. Throop enabled the residents along the Ohio River to survive during the flood of 1884 and to rebuild after the flood.

Fifty years after the flood of 1884, a plaque was erected on the site of the house where  Clara Barton lived while directing relief of those living along the Ohio River. 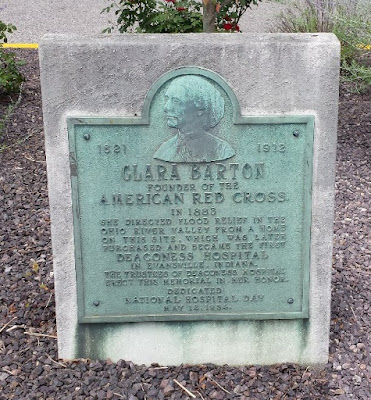 I posted a link to this article in the TOWNE COUSINS Facebook group. Clara Barton is a descendant of William Towne, my immigrant ancestor, who was the father of two women hanged for being witches in Salem Massachusetts in 1692. I'm also related to the Troop/Throop family who came to Eddyville with Mathew Lyon from Vermont.

Thanks, Deb! I had no idea of Clara Barton's connection to your Towne family. I appreciate the information!

My direct line to William is through his son Jacob, brother to Sarah Towne. Sarah is the direct ancestor of Clara Barton, listed above.
Deb