The earliest documented religious presence in Smithland, Livingston County, Kentucky was that of the Protestant Episcopal Church. In July 1837, William Croghan sold Lot #77 on Charlotte Street to the Diocese of Kentucky for the use of a congregation to be called Calvary Church..

The Rev. A.A. Willis was rector of Calvary Church and was officiating at marriages in 1837 and 1838.  He was still there in 1839 when the Rev. Thomas Horrell wrote the following in his journal of his travels and labors in the ministry: "I ... returned to Smithland at the mouth of the Cumberland, where the Rev. Mr. Willis was laboring as Missionary."﻿
The Rev. Willis reported to the diocese that he had performed two marriages, one infant baptism and two burial services in 1839, according to the Journal of Proceedings of the 11th Convention of the Protestant Episcopal Church. The Rev. Willis usually held two services on Sunday for the white congregation and one service for the black congregation. He also taught a female Bible class in the afternoon and lectured on Wednesday nights.

By 1841, the Rev. Robert Ash was rector of Calvary Church. The Rev. Ash reported in 1841 the following: "In reviewing the condition of the missionary station committed to my care, I find nothing very special to mention. I have endeavored to preach the Gospel faithfully to all classes - to the master and to the slave - to the young and to the old. Though little good has apparently resulted from my labors, yet I consider it my duty to persevere, and feel assured, that as far as the truth has been faithfully preached to the people, the divine promise will be fulfilled in due time." The Rev. Ash reported he had 12 families attending worship services in Smithland, had baptized one infant, no adults and 43 children were catechized. He died 24 July 1846, at the age of 43 years, and is buried in Smithland Cemetery.

Shortly before 1850, it is believed that the Rev. G.G. Moore began serving as rector of Calvary Church. He had served several other Protestant Episcopal churches in Kentucky - Trinity Church in Covington in 1844 and St. Peter's Church in Parish, Kentucky in 1847. His time in Smithland was short as he died in 1850 and is buried in Smithland Cemetery.﻿

The best information on the church building is found in a letter written 12 April 1878 by M.H. Carson of Smithland to Bishop Dudley of the Diocese of Kentucky about the condition of the church. He wrote that the church was "rapidly going to decay; the roof is so bad that the plastering overhead and the floor is ruined, and I fear the sheeting and rafters are rapidly decaying. The church was built in 1839, so my wife informs me. Her former husband [ Timothy Alvord ] did a great deal of work on the building as a donation, he being a carpenter and my wife a member of the church and held a pew, but afterward joined the Presbyterians. From that time the Episcopalians ceased to hold service here. The house is a frame building ..."  Carson stated he had heard rumors that the building was to be sold. If not sold, he offered to lease the building for 10 years. The following year, 1879, at the annual council of the church, it was resolved to sell the church property in Smithland.

In January 1881, the property was sold  to Clifford Dooms, Levi Pippin and Nathan Dorroh, deacons of the Coloured Baptist Church of Smithland.  It was specified that the property was not to be used for any unhallowed or unholy purpose. 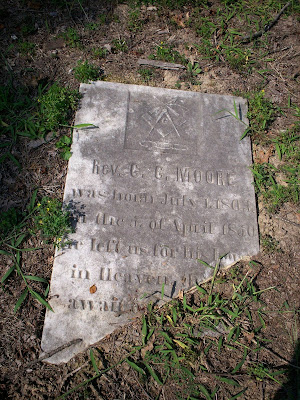 Rev. G.G. Moore
was born July 1, 1803
died 5 of April 1850
He left us for his home
in Heaven  [broken]
[The bottom part of the stone is standing,
but difficult to read]
Published 22 August 2013, Western Kentucky Genealogy Blog, http://wkygenealogy.blogspot.com/﻿

Ms. Joyce,
Enjoy your blog very much, having been born and raised in Union County, with roots in Crittenden, Livingston, and Caldwell. Your piece on Calvary Episcopal Church in Smithland, made me think of this link http://mdah.state.ms.us/manuscripts/z1848.html

that I had saved regarding a former minister at old St. John's Episcopal Church in Uniontown. It's tantalizing to see that there are old interior photos in existence, but I suppose one would have to go to the Mississippi State Archives to see them.

Thanks so much for all the work you have done, and for publishing it for the enjoyment of others.

Thanks for leaving your comments and the link to the Robert E. Lee Craig data. I would love to see that scrapbook. There is a postcard of the exterior of St. John's Episcopal Church on this blog here:
http://wkygenealogy.blogspot.com/2009/01/wordless-wednesday-union-county-church.html

Wow, the things you find, Brenda! I never knew there was an Anglican presence in Livingston County that early on.

They had a big presence in Smithland, Amy. Stanley P. Gower, who owned the Gower House, was Episcopalian as was Dr. David B. Sanders.