A Case of Bigamy

This tombstone is found on the hill in Smithland Cemetery, which overlooks the Ohio River where it merges with the Cumberland River in Livingston County, Kentucky. No flowers pay tribute to this child and the weathered monument gives no hint to the controversy that swirled around her parents years after the infant's birth and death. 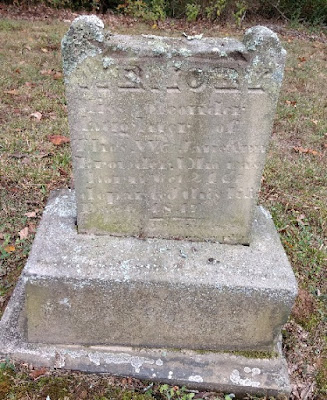 Thomas Browder left Kentucky and went to California after the Gold Rush began.  We don't know the year he arrived in California, but a newspaper article states Thomas Browder was arrested in San Francisco in 1859 on a charge of bigamy. Pressing charges was the mother of his bride, who stated he had a wife in Kentucky, but had married the new wife, who was 16 years old,  in Santa Cruz County the previous year.[2]

Browder was arrested and his trial began in January of 1860. D.W. Patterson of Livingston County testified to having known Browder in Livingston County in 1841 or 1842. "Capt. Browder and a lady came to his home in 1848; it was understood that the lady was his wife, although he has no recollection that defendant introduced her as such."[3]  No marriage record for Thomas Browder has been found in Livingston County or in California.

The trial of Thomas W. Browder continued in California, but was later dismissed by the judge as there was insufficient testimony to warrant the case being continued.

Thomas W. Browder disappears after the trial. He does not appear in the 1860 California census records.  What happened to him?  Did he stay in California or return to Kentucky?   The only clue to his life in Livingston County is the tombstone of his baby daughter in Smithland Cemetery.