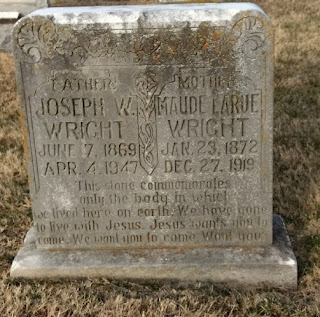 This stone commemorates only the body in which we lived here on earth. We have gone to live with Jesus. Jesus wants you to come. We want you to come. Won't you?

According to his death certificate,[1] Joseph W. Wright was born June 7, 1870 in Kentucky and was a funeral director.  His parents were Joseph Wright, born Kentucky, and Martha Tate, born Virginia. His obituary[2] stated he was a prominent Livingston County businessman, a resident of Hampton, and died at his home." He had been in ill health for several years, having retired from general merchandising business a few years ago. Funeral services were at the Hampton Methodist church Saturday. Burial in Salem Cemetery. Survivors include a daughter, Mrs. Ladd Robinson, and a grandson, Joseph Franklin Robinson."

Joseph W. Wright appears on the 1870 Union County, Kentucky census in the household of Joseph and Martha Wright.[3]