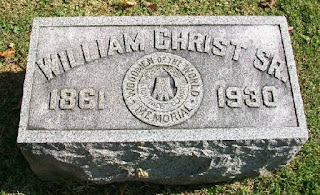 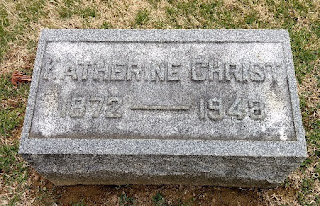 William Christ is found in the household of Andrew and Catherine Christ on the 1880 Vanderburgh County, Indiana census.[2] They were living at 315 Upper First Street in Evansville.  William Christ's parent were both from Darmstadt, Germany. His father emigrated to America at the age of 17 or 18 years.[3]

William Christ and "Katie" Mayer were married 24 November 1892 in Evansville.[4]   By 1900, they had moved to Hopkinsville, Kentucky, where they were living on N. Main Street.  Later they moved to Henderson and continued to live there the remainder of their lives.

William's obituary stated he was connected with the Kentucky Bakery for 20 years and prior to that he was with the Kingdon Hotel.[5]  Funeral services were at his residence with the Rev. W.J. Hillman, pastor of the Zion Evangelical Church officiating. Survivors included his widow, sons William Jr., Oscar, Karl and Emil Christ, all of Henderson; daughters, Virginia and Katherine Christ; two grandchildren, sister, Miss Lucy Christ of New Albany, Indiana and a brother, George Christ of Evansville.

The death certificate of Katherine shows she was born 11 August 1872 in Germany and died 29 April 1948 in the Henderson Hospital. [6] Her usual residence was 325 Washington Street, Henderson. Her father was listed as Joseph Meyer and her mother as Katherine Rickrick. Both were born in Germany.

Funeral services for Katherine Christ were held at the Evangelical and Reformed church with the Rev. David Schlinkman officiating. Surviving were daughters, Katherine and Virginia; sons William, Karl and Emil, all of Henderson and a brother, Karl Meyer of Germany.

Watch for another post mentioning William and Katherine Christ soon.