I enjoy writing  Tombstone Tuesday posts. I love starting with birth and death dates and filling in the time between those dates. Who did he  marry?  Where did he live?  What was his occupation? Was he born in this county and if not, where was his birth place?

Sometime ago I came upon a weathered tombstone in Smithland Cemetery that was almost unreadable. Taking a photograph and rubbing my hand across the face of the stone revealed the following information: 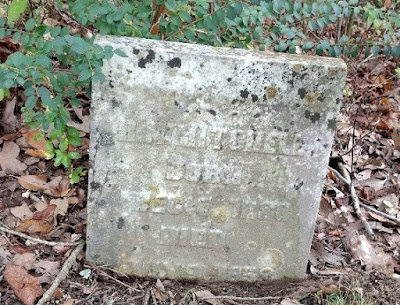 An entry in my muchly-used copy of the Livingston County cemetery book [1] verified the birth date, but noted the death date was below ground level.  Apparently, after the book was published, someone had dug down so that the death date was revealed.

Robert Mitchell, age 61 and born North Carolina, appears on the 1850 Livingston County census[2] along with Nancy, age 45 born Kentucky and James and Joshua East, ages 14 and 19 respectively. Wife and children?  Continued checking provided the following information:   Robert M. Mitchell married Mrs. Nancy East 12 May 1844[3] in Livingston County. Nancy East had previously been married to Clinton Kidd 26 July 1821[4] and Jesse G. East 16 Nov 1834.[5]  Good!  Robert Mitchell and R.M. Mitchell were likely the same person.  It is likely that Robert M. Mitchell was married prior to his marriage to Nancy, but there is no such marriage recorded in Livingston County.

According to his death record,[8] Robert M. Mitchell  was born in Orange County, North Carolina, was also a shoe and boot maker and was the son of R.L. Mitchell.

Other records I searched, but without success, were the deeds. Apparently, Robert M. Mitchell did not own land.  The Livingston County tax lists [10] verified that Robert M. Mitchell owned no land.  He was taxed on one white male over 21, one horse and a gold/silver or metallic watch. He also had two cattle and 10 hogs on the 1855 tax list. He was not listed as a slave owner on the 1850 slave schedule.

So, after starting with nothing more than a birth date and death date, I have filled in the gaps in his life. I know who he married, his occupation, where he was born and the name of his father.  Now, on to a new project.