The records of Sacred Heart parish at St. Vincent, Union County  show that the Rev. Stephen Baden was the first priest to visit the Catholic population in southwestern Kentucky.  The first sermon was preached at the courthouse in Morganfield and the church was permanently established in 1819. In 1820 the Sisters of Charity established a school that became St. Vincent Academy.[1]

Many students who lived at a distance as well as many who lived in the surrounding area attended St. Vincent Academy. In 1891 the school celebrated the 71st annual commencement. Special trains were run to bring the large crowd to the exercises at St. Vincent.

Diplomas that year were granted to Mary Pike, of Uniontown; Alma Mott, of Princeton; Ruth Shoemaker, of Morganfield; Julia Wheatley and Lucy Mattingly, of Waverly.[3]

A newspaper advertisement from 1913 shows that the school had "modern equipment, music, drawing and painting; shorthand and typewriting taught to the best improved methods."[4]

In 1920, St. Vincent Academy celebrated its centennial for three days in June.  Several women were to attend and celebrate their 50th anniversary of their graduation, including   Mrs. M.R. Waller and Mrs. J.G. Taylor. Another graduate who was to attend was Mrs. B.M. Mart, of Morganfield.[5]

St. Vincent Academy operated a boarding school until about 1964.   By March 1967, the faculty of St. Vincent's was planning the final days of the school.  There were no longer enough teachers to continue operating the high school and it was decided to close the school, leaving St. Vincent Academy parish  (grade)  school open. At that time, there were 265 students (63 students in the senior class) at St. Vincent High School and 85 parish school students. [6]

On the 5th of December 1867, the buildings and land were auctioned off, bringing a total of $170,000. The administration building and other structures on a 10-acre plat were purchased for $17,500 by three men from Henderson, Kentucky. The land was sold to others, probably for farming.[7] 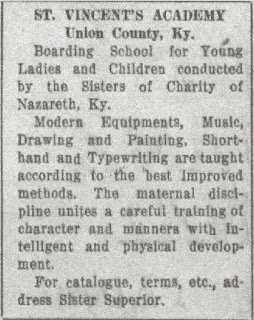 Posted by Brenda Joyce Jerome at 6:00 AM