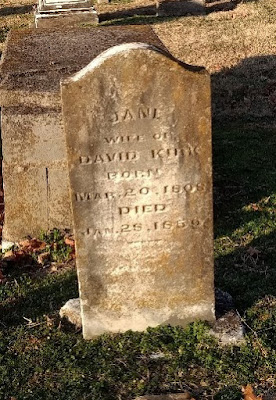 Jane Kirk and her children appear on the 1850 Caldwell County census.[1] As the youngest child was born ca 1840 in Ireland, it appears the family left Ireland after that year and traveled to America.  There is no mention of Jane's husband, David Kirk.

Jane Kirk, daughter of David and Jane Kirk,  died 3 July 1858 in Caldwell County and is also buried in Cedar Hill Cemetery. [2] In 1860, David Kirk Jr. and his sister, Nancy Kirk, and brother Alexander Kirk, are living together in Princeton. [3]

David Kirk, son of David and Jane Kirk, married Sarah Jane Guess 6 September 1860 in Caldwell County. On the marriage bond he listed his parents as David Kirk and Jane Henry.[4] Was she related to Joseph Henry, who is also buried in Cedar Hill Cemetery?  Nancy Kirk married John Garrett 16 November 1864.[5]  Alexander Kirk married Miss Bettie J. Maxwell 19 January 1870. On the marriage bond he listed his occupation as a merchant and was living in Leavenworth, Kansas.[6]