Burials Outside the Tomb

A  recent post on this blog provided the names and dates of family members  listed on the H.F. Given Tomb in Smithland Cemetery in Livingston County, Kentucky.  That listing did not include relatives buried within the family plot, but outside the tomb. The entire plot is enclosed within a wrought-iron fence. Let's take a look at those who are buried there.

James B. Ferguson and Catharine Haydock.  They are listed together as they were married from January 1832 until James died in November of that same year.  Catherine then married Joseph Haydock  before she died in 1840 at the age of 30.  Catharine's story is more than the names of her husbands, though. She was the daughter of John P. Given, brother of Dickson Given and Joseph R. Given, whose names are inscribed on the front of the Given tomb.  John P. Given was born by 1784 and died after 1814,[1] possibly in Pope County, Illinois.  He married Mary "Polly" Johnson 30 December 1807 in Livingston County.[2] John P. and Polly Given had the following children: William T. Given, born 16 December 1808; Catherine F. Given, born 25 March 1810 and Elizabeth J. Given, born 22 December 1812.[3]

Four Children of D.A. and C. Given: two unnamed infants plus  Ann Given (3 January 1848 - 29 December 1849) and Mary Given (died 11 June 1848).  D.A. Given was Dickson Augustus "Gus" Given, son of Dickson and Nancy Given. He obtained a bond to marry Clarissa H. Goodall, daughter of Turner Goodall, 11 January 1838 Caldwell County, Kentucky. D.A. and Clarissa "Clara" Given lived in Paducah after their marriage before moving to New Orleans, where his brother, Henry F. Given, had settled and where both were involved in Given, Watts & Co., a commission house. D.A. Given died in New Orleans.  He and Clara are buried in a Given tomb, along with some of their descendants, in Metairie Cemetery. [4] 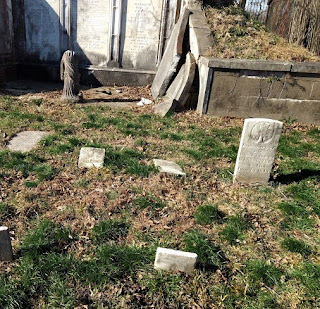 Tombstones of children of D.A. and Clara Given

There are two more tombstones that puzzle me. Just inside the gate to the Given plot, on the right side next to the fence is a large footstone with the initials J.C.G. This stone was not included in any of the earlier recordings of Smithland Cemetery so it is assumed the headstone has been missing for many years.  The style of the stone indicates it is from the 1840s.   Dickson and Nancy Given had a daughter, Mary Lucinda Given, who married James Campbell. I would almost bet that J.C.G. was, in fact,  James Campbell Given and was a son of D.A. and Clara Given. 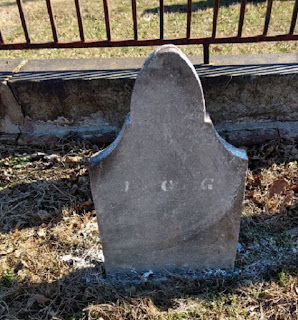 The Given family was among the most influential families of early Smithland. Although all moved away, they certainly left their mark on the town.