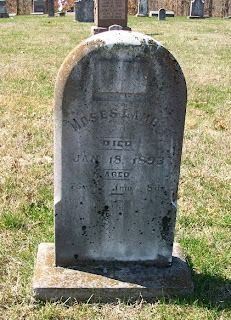 In the 21 January 1892 issue of the Crittenden County newspaper, it was reported that "Mr. Moses Lamb, an old citizen of the Sugar Grove neighborhood, is very sick." Then, in the 19 January 1893 issue of the newspaper, it stated that ﻿"Yesterday at noon, Mr. Moses Lamb died at his home in the Sugar Grove church neighborhood after an illness of several weeks. He was 73 [sic] years old and was reared in the community in which he died. He leaves a large family."

Posted by Brenda Joyce Jerome at 3:13 AM