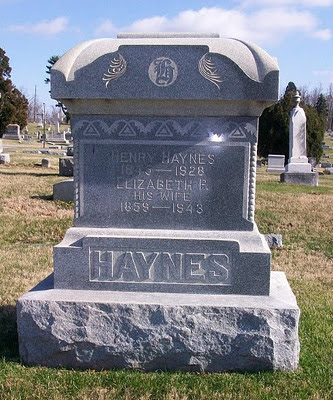 Henry Haynes' death certificate shows that he was born 8 June 1845 Breckenridge County, Kentucky and died in Henderson 28 March 1928. He was the son of Stark D. Haynes and Mary Warfield, both born in Breckenridge County. He was a retired farmer.

Henry Haynes' obituary appeared in the 29 March 1928 issue of the Henderson Morning Gleaner. It stated he was survived by his wife and sons, Leander and Paul, of Evansville, and Henry Haynes Jr. of Daytona, Fla. Funeral services were held at his home on North Main street.

Elizabeth Priest Haynes, widow of Henry Haynes, was born 6 June 1859 Henderson County and died 31 October 1943, according to her death certificate. Her parents were Ferando Priest and Francis Butler, both born in Kentucky.

Elizabeth P. Haynes died in the Henderson hospital after falling and breaking her hip in her home on North Main street. She was survived by sons Henry, Daytona, Fla.; Joe, of Evansville and Paul H. of Reed and 10 grandchildren. Also surviving were three brothers, Roger Priest, Detroit, Mich.; J.W. and Geo. F. Priest, Hebbardsville. Her obituary appeared in the 2 November 1943 issue of the Henderson Morning Gleaner.