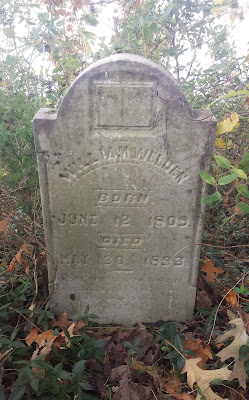 William Welden
Born
June 12, 1809
Died
May 30, 1893
A precious one from us has gone
A voice loved is stilled
A place is vacant in our home
Which never can be filled
Buried Green Cemetery near Pinckneyville, Livingston County, Kentucky. Tombstone photographed and submitted by Marty Hodge of Marion, Kentucky.
An article about Pinckneyville in the 19 August 1879 issue of the Crittenden Press﻿ states the following: "It has a population of 50, the oldest of whom is old uncle Billy Weldon." "Uncle Billy"  operated a store in Pinckneyville in the mid to late 1800s.
His obituary can be found in the 9 June 1893 issue of the Press. "It is our painful duty to chronicle the death of Mr. Wm. Weldon of Pinckneyville, which occurred at his home last Friday. Wm. Weldon was one of the few surviving early settlers of this section of Kentucky, and like most of them, he was a man of strong character and he placed his imprint upon the present generation. He was born in South Carolina in 1809 and in the thirties, probably 1832, he came to Kentucky, settling on a farm four miles south of Marion. Here he hewed a farm and went to work. For many years he lived there; many sons and daughters were born unto him, and today among our best citizens are found many of his descendants."
Buried beside "Uncle Billy" is his wife, Sally, who was born 1824 and died 1906.