Tucked away under a bush in Smithland Cemetery is a tombstone which has been sinking into the ground since the death of the man who is buried here. The words are few and only hint at his life story. 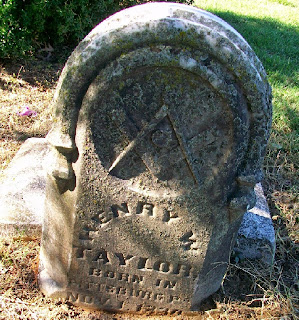 Henry W.
Taylor
Born in
Pittsburg Pa
Nov. 1, 1830
[The death date is below ground level]
H.W. Taylor appears on the 1860 Livingston County census in Smithland. In his household are his wife, Pauline Renaud Taylor, whom he married 8 June 1854 in Livingston County. Taylor is listed as an engineer and likely worked on a steamboat.  Also in the household on the census were A.L.J. Renaud, age 21, and Liddia Renaud, age 13, both born in France. Their marriage record shows H.W. Taylor was born in Pennsylvania. Pauline was age 24 and born in France.
From the symbol on his tombstone, we know that Taylor was a member of the Masonic lodge, but was that in Smithland or was it in Pennsylvania? He is not listed with Smithland Lodge No. 138 as a member in 1867.
While there is little information on the life of Henry W. Taylor in Livingston County records, a few items turned up in newspapers. The first item appeared in the Cairo, Illinois newspaper in 1866. It stated that H.W. Taylor, a steamboat engineer, married a French lady, a resident of Kentucky. They made their home in Smithland. Before the war (Civil War), Taylor worked on a steamboat. When the war began, Taylor entered the service of the federal government and continued until the war ended. Then came the news that Mrs. Taylor had inherited a fortune from her uncle in France.
The other newspaper article appeared in the 7 November 1869 issue of the Cincinnati Daily Enquirer in the column of news of steamboats and the river. It mentions that George W. Hagey  and Mr. Henry Taylor died within 24 hours of each other and the remains of both were being conveyed to Smithland for burial. So, we know Henry W. Taylor died in November 1869 in Cairo, Illinois.
H.W. Taylor's widow, Pauline, appears on the 1870 census in Alexander County, Illinois. In her household were Alex. N. Taylor, age 8 and born Kentucky, and Henry and James Taylor, twins age 7 months and born Illinois.
Under Court News in the 20 November 1875 issue of the Cairo Bulletin, the following notice appeared: "In the matter of the guardianship of Alexander W. Taylor, minor heir of Henry W. Taylor, deceased, Pauline Taylor guardian ordered to report her acts and doings in the premises in her next report."  So ... was only Alexander a child of Henry W. Taylor or had the twin boys, Henry and James, died between 1870 and 1875?
In 1873, Pauline married Thomas Coon and they moved to Fulton County, Kentucky.  Alex N. Taylor, oldest child of Henry W. and Pauline (Renaud) Taylor, became a printer and lived in Evansville, Indiana and died in Henderson, Kentucky 30 September 1946. He is buried in Fernwood Cemetery next to his wife, Ella.
Published 19 December 2013, Western Kentucky Genealogy Blog,  http://wkygenealogy.blogspot.com/
﻿
Posted by Brenda Joyce Jerome at 3:30 AM