Sometime before 1830 John H. Smith and his wife, Rhoda, moved to Livingston County, Kentucky.  The following year, John H. Smith purchased lot #22 on Front Street in Smithland.[1] This lot is located in the middle of the block between Level and Maiden Streets and was an ideal location for a business. There is no indication, however, that Smith had a business there or the type of business it might have been..

Smith became a part of the activity of Smithland and, on 1 Oct 1832,[2] he was appointed captain of the group of men who routinely patrolled to make sure the town was quiet and no one, especially slaves, was out without a good reason.

John H. Smith did not stay in Smithland.  He and his family are found on the 1840 Pope County, Illinois census, but apparently returned to Smithland after that census. In April 1844, the children of John H. Smith purchased the lower half of lot #31 in Smithland as a result of a decree (John Shers vs Elizabeth and Eliza Simpson) from Livingston Circuit Court.[3]  Named as children of John H. Smith were C.W. Smith, Malinda H. Cook and husband Elbert Cook, John B. Smith, Wm. B. Smith and Mary Smith.

From her tombstone in Smithland Cemetery, we know the wife of John H. Smith was named Rhoda, but we do not yet know her maiden name. 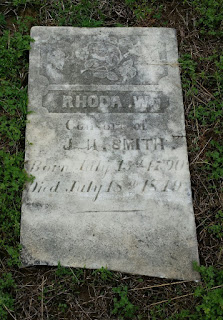 John H. Smith married Mrs. Elizabeth Green, former wife of Richard A. Green, 23 June 1850.[4] The marriage was not happy and "whereas unhappy differences" existed between them, they agreed to live apart . Elizabeth could live wherever she wanted and do whatever she chose as if she were a femme sole and John agreed to not bother her or claim any of her assets, including her dower interest in the estate of her former husband.[5]

John H. Smith died testate in 1856. In his will he named only his daughter, Mary, leaving her town lots in Smithland and all household and kitchen furniture. 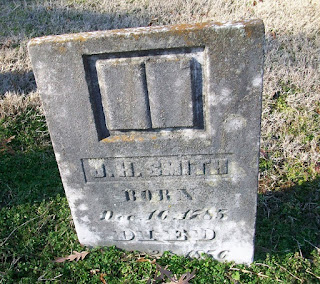