One would not think it likely that oysters would be a hot item on the menus in western Kentucky at the turn of the 19th century, but they were.  Some oysters were not the eating kind, but of the eating kind, raw oysters were considered a delicacy. What made them popular in western Kentucky?  Was it because they were considered to be an aphrodisiac?  I doubt it. I think it was something new and different that caught on. Oysters were served in almost every restaurant and they were the mainstay of many church suppers as well as private dinners.

County Court Day in Kentucky brought many folks to town to transact business and visit with friends. What better time to serve this popular food?  In 1905, the Ladies Aid Society provided food at a reasonable cost.[1] 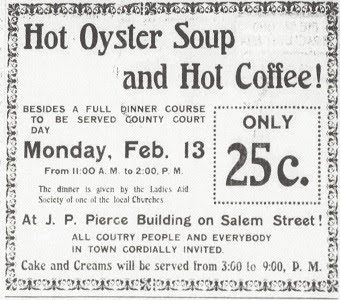 When the Marion Methodist Church held an oyster supper in the church basement on 22 November 1921, their menu included "Oyster Soup and Crackers, Fried Oysters, Celery, Pickles, Salad."[2] If you didn't like oysters, you were out of luck.

The next month, Mrs. Tresler entertained the Marion Musical Club. "The refreshments were served in two courses. The First Course consisted of hot chocolate, salmon salad, scalloped oysters and sandwiches and the Second Course consisted of ice cream and cake."[4]

This post is to show what our Crittenden County ancestors were eating  100 years ago. While oysters might be served on special occasions in the area today, I doubt you can find them on any restaurant menu in Marion.