Advertisement For a New Courthouse 1866

In January 1865, the first Crittenden County, Kentucky courthouse was burnt by guerrillas.  The majority of the county records survived as the records of the county clerk were located in a separate building in the public square and did not burn.

Temporary quarters were found to hold county and circuit court and plans were made to rebuild the courthouse.   It was to be 40 feet square, made of brick, two stories high and built on the foundation of the old courthouse.  The material used was to be of the "best quality."  Commissioners appointed to oversee the letting out of the rebuilding of the courthouse to the lowest responsible bidder. Those commissioners were J.N. Woods, Alex. Dean and S. Hodge.

The advertisement below appeared in the Evansville Daily Journal of Evansville, Indiana on Friday, 2 February 1866. 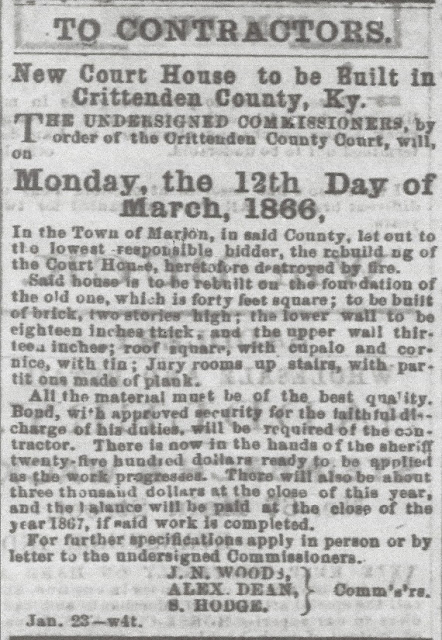 Once again the courthouse was rebuilt and this one was in use until 1961.