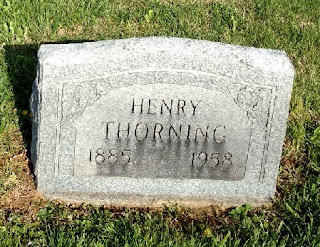 According to his death certificate, [1] Henry Thorning was born 2 January 1885 in Kentucky and died 11 April 1957 Livingston County. He was a carpenter by trade and never married. His parents were John Thorning and Sharlet Mahan. Mrs. Nannie Loyd was listed as informant.

Henry Thorning was enumerated on the 1900 Livingston County census[2] in the household headed by his mother, Charlotte Thorning. Also listed in the household were his sisters, Nannie, Minnie and Sarah. Minnie Thorning later became the third wife of my great-great grandfather, Chester C. Bebout.

In 1942, Henry Thorning registered for World War II draft. [3] He was listed as 5 feet, 9 inches tall, had brown eyes and gray hair and weighed 150 pounds. He was 57 years old and the person who would always know his address was Nannie Loyd, his sister.