The House On Charlotte Street

For several  years I have been researching the Barner family, along with the house they lived in, on Charlotte Street in Smithland. Benjamin Barner was the first of the family to live in this house and, about 1841, his brother and sister in law, Sterling M. and Sarah Jane (West) Barner, moved from Nashville, Tennessee to live with Benjamin. Also living in the household were Sterling and Sarah Jane's children, Mary E., Joseph, and Martha "Miss Pattie" Barner.

Unfortunately, all members of the family were deceased by 1870 with the exception of Sarah Jane. She and her grandson, Sterling Barner Taylor, child of Miss Pattie's unfortunate marriage to B. Waller Taylor, moved to Russellville, Kentucky  to live with her sister, Elizabeth Saffrans. In 1873, Sarah Jane married George Blakey and then died in 9 January 1879 in Bowling Green, Kentucky.  Through the years the  Barner house in Smithland was rented out to various tenants, including J.W. Bush,[1]  Mrs. Nannie (Haydock) Ferguson,[2] and E.G. Leeper.[3] Leeper agreed to pay rent of $125 per year.

By 1890, Miss Pattie's son, Sterling Barner Taylor, a physician living in Columbus, Ohio and the only surviving heir of the Barner family, began to sell off the property in Smithland, including the house on Charlotte Street.  Mrs. Nannie Ferguson, who had first rented the house in 1866 and had also been living there since the summer of 1880, agreed to buy Lots #37, 38, and 39 which included the dwelling house, for the sum of $500.[4]

Nannie Ferguson died in 1901 and the Charlotte Street house and two extra lots were inherited by her children, Hamlet, Nettie and Maude Ferguson. Hamlet  was living in Kansas City, Missouri  when he conveyed his interest in the property to his sisters, Nettie and Maude.[5]   By 1919, Nettie and Maude had moved to San Diego, California and sold the house to J.E. Massey.[6]  Massey and his family lived in the property for a number of years and then it sat empty for some time. On 1 December 2009, the house was destroyed by fire. Today the lot on which the house stood is vacant with no remnant of the old house remaining.  It was said that the oldest part of the house was an original log cabin in the center portion of the house. This appeared to be true from what remained of the house after the fire. Very likely the house was enlarged to accommodate the larger number of people when Sterling moved his family to Smithland.

There are various rumors about the house on Charlotte Street. A local tradition says it was the oldest house in Smithland, but no one, to my knowledge, has offered proof.  Some people believe that slaves escaped to free territory via an underground tunnel leading from the house to the Ohio and Cumberland Rivers, just a half block from the house.  Whether this is true or not, I cannot say, but I do know that on the 1850 Livingston County Slave Schedule, Sterling Barner had four slaves listed as his property. In 1860, Sterling had four slaves and his brother, Benjamin, had two slaves. It is interesting that the 1870 Livingston County census does not show any black or mulatto persons with the surname of Barner. Did they move away from Livingston County when they were freed or did they change their surnames?


Watch for a post soon on the Ferguson family who lived in The House on Charlotte Street. 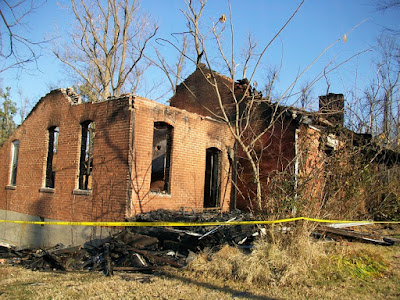