New On My Bookshelf 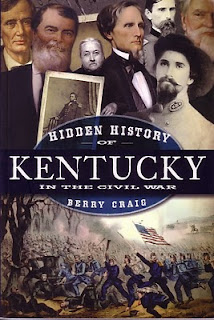 Recently I bought a book that I think might interest you. The title is Hidden History of Kentucky in the Civil War by Berry Craig, a professor of history at West Community and Technical College in Paducah. The book is of particular interest to those of us who are interested in the events in western Kentucky during the war.

Kentucky was technically a neutral state at the beginning of the war, but this did not prevent people from taking sides and skirmishes from occurring. One such event discussed in this book is the skirmish in 1861 in Lyon County at Saratoga Springs Church, which still shows a bullet hole in it's side. Another story is of Sister Mary Lucy, a Sister of Nazareth nun, who lost her life helping to save others. She had studied music at St. Vincent's Academy in Union County, but was teaching music at St. Mary's Academy in Paducah when the war broke out.

There is also the story of Andrew Jackson Smith, born a slave in Lyon County. He and another slave decided to enlist in the Federal army and walked 25 miles to Smithland to enlist. Not allowed to enlist, be volunteered as a servant to a Union officer.

My favorite story, though, is of Adam Rankin "Stovepipe" Johnson of Henderson. He was responsible for "capturing" Newburgh, Indiana, where I live, without firing a shot.

This is a fun book and priced at slightly under $20. I bought my copy at the local Barnes & Noble Bookstore. If your local bookseller doesn't have it, maybe it could be ordered. Enjoy!
Posted by Brenda Joyce Jerome at 2:54 AM